5 Ways to Set Up Your Business Voice & Data Network: 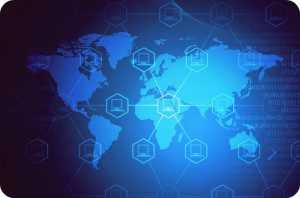 Multiprotocol Label Switching.  Its name says it all: the network is protocol agnostic and packet forwarding decisions are determined by the labels on the data packet and not its contents.  This network creates a private network over the public internet.  It allows for a company to centralize their voice and internet sources, their routers, PBX and firewalls and increase the level of security because it can be set up with only one entry point.  MPLS is fully meshed and provides any to any connectivity without requiring multiple circuits at each location.  It’s completely scalable; you can add a new site to a network simply by adding a new MPLS circuit.  Security equals private line and offers a high level of throughput.  Very good for real time traffic like voice and video because traffic can be prioritized.  QoS (Quality of Service) is available for voice communication.  MPLS is offered by every major carrier, like CenturyLink, AT&T and Verizon and most competitive local exchange carriers, like TW Telecom, XO and Level 3.

Point to point connectivity.  Good for up to a few locations but can get expensive.  If you want your network to be fully meshed, you need multiple circuits at each of your locations.  The service has a mileage component to its pricing, so the further two locations are from each other the more expensive the circuit.  Unlike fiber, the bandwidth cost increases exponentially as it’s increased.  However, if you have two locations in close proximity to each other, and don’t plan on expanding and your internet and data traffic isn’t significant, point to point is good solution.  Point to Point is very secure and offers true throughput. Not very scalable because all the routers on the network would need to be reprogrammed whenever a new site is added and multiple circuits would be required if your network is fully meshed.  Can get by without fully meshed but if one T1 goes down so would your entire network.  Private Line is available from incumbent providers, like CenturyLink, AT&T and Verizon.  It’s available from some competitive local exchange carriers, for instance Cogent and Integra. You can, however, hire a data networking service provider to set up your business’s voice and data network.

Became popular in the 90’s as a lower cost networking option compared to point to point.  The advantages Frame relay offered over point to point T1 were it was fully scalable, there was no mileage component in its monthly cost and it didn’t require the same number of circuits to be fully meshed.  The committed throughput on a Frame Relay circuit is only half of the bandwidth of the access connection to the frame cloud.  That can lead to packet loss and makes Frame Relay a bad choice for VoIP.  Security is good but not at the level of point to point.  Frame Relay, despite its popularity, has been made an “end of life” service by most telecom providers, like CenturyLink, Sprint, AT&T and Verizon.

Ethernet used in Metro Area Networks.  Very secure and offers speeds in the mega and gigabit levels.  Metro Optical Ethernet is completely scalable, fully meshed, economical, secure and private.  Issues are that it is not available in a lot of locations – typically construction is required – and it is metro based.  That means that it’s not made for businesses with locations spread across cities and states.  You can use other transport services to connect different Metro Ethernet networks, however.  Metro Optical Ethernet is available from most incumbent providers.

Tunneling software used to create private connections over the internet.  Totally secure and private because of use of encryption.  Can only be used for data transmission and requires a lot of overhead so the performance is not great.  By far the least expensive option.