The Internet, Back in the Day 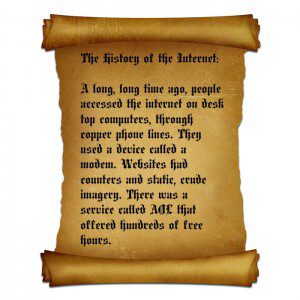 Now that an entire generation that has grown up with dedicated, high speed internet and little kids are being taught computer code as a second language, let’s take a look back to the way things used to be.

Believe it or not, it used to take a few minutes just to connect to the internet. Your computer needed to be located in close proximity to something called a phone jack. You were assigned a phone number by your internet service provider. You’d program that phone number into your computer and your modem would call the number to connect you. If there was a line available, you’d be connected. If not, you’d hear a busy signal and have to try again later.

The nostalgic sound of a modem connecting to the internet now rivals the sound of a phonograph needle landing on a record album or the clickety-clack of a typewriter.

This is a time before everyone had a smart phone. People depended on their home phones. The problem was – if you were online – you were tying up your phone line. Many families ordered second and third phone lines. If you only had one phone line and Call Waiting, you had to remember to disable Call Waiting before you connected to the internet. If you forgot and someone called while you were online, your connection would be interrupted.

I worked for the phone company in the 90’s and made a habit of offering voicemail as a less expensive alternative to a second phone line. If you only had one phone line and were online, incoming calls could go to voicemail. When you were done your session, you could pick up the phone and listen for a stutter dial tone – that’s how you knew you had a message. But a stutter dial tone wasn’t compatible with a dialup modem, so it was necessary to clear out your voicemail messages before you went back online.

Items I had to deal with on a daily basis while working for the phone company in the 90’s:

A little later on:

In the beginning there was no YouTube, no podcasts and you had to speak to a human to purchase car insurance. You might find yourself waiting 2+ minutes for an image to appear on your computer screen while your TV in the next room was delivering live video from a sporting or noteworthy event. It was interesting how much we put up with to access pixelated images and printed words. But in less than 20 years the internet has all but eliminated:

And is chipping away at:

It was like everyone understood the potential of the internet in its infancy and knew to jump onboard (or online) or miss the boat. Thanks to the internet, we have access to a dynamic source of information, 24 hours a day, 7 days a week. We can purchase just about anything imaginable, at anytime, day or night, without leaving our homes.

When I was a teenager, I used to drive 20 minutes to Bill Battey’s because the store had the best selection of running shoes. But there was a good chance that Battey’s wouldn’t have my size in the shoe I wanted and I’d return home an hour and half later empty handed. Now I can find the best price and selection in minutes and receive my shoes the next day.

When I was kid and needed to write a report for school, I had to get my mom to drive me to the library. If the library was closed or some other kid was using the encyclopedia I needed, I was out of luck. Now a student with access to the internet is just a few clicks away from more information than the information contained in a thousand libraries.

There was a time when you had one place to call for phone service and the internet barely existed. Now you can access CarrierBid.com and request pricing from a single source and start a carrier bidding war. Providers like Verizon, CenturyLink, Comcast and Time Warner Cable will bid on your services and you’ll receive the best pricing and terms available.

More information, contact CarrierBid today or complete the form on the right side of this page.