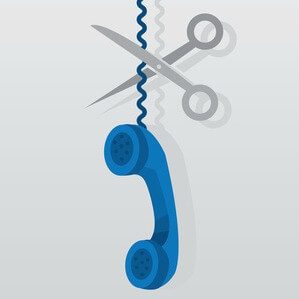 In 1907 AT&T’s slogan was “One Policy, One System, Universal Service.” AT&T, through the Kingsbury Commitment, was allowed to operate as a monopoly and not subject to antitrust action. That monopoly continued until 1984. At that point, AT&T was broken up into smaller regional phone companies, called RBOCs, or Regional Bell Operating Companies. RBOCs are also known as ILECs, or Incumbent Local Exchange Carriers. The three major ILECS are Verizon, AT&T and CenturyLink.

Part of the agreement to be the only phone company in a given region is the responsibility to bring service to anyone that resides in that area. It doesn’t matter if the customer is located a mile away from the PSTN or that the phone company delivering service will never experience a return on its investment. Along with the hard to reach customers, ILECs are required to make phone service affordable for every household.

Before cable company phone service and widespread wireless phone use, the phone companies had plenty of customers to subsidize the construction required to deliver service to hard to reach customers and the Universal Service Fund to make their service more affordable to low income families. That’s no longer the case. More and more families are doing away with their home phone lines. The RBOCs landline customer base is shrinking at a much faster pace than the cost to maintain the PSTN.

The regional phone companies would like to replace the PSTN with more advanced IP networks. They feel that any dollar spent on the PSTN is not only lost but can’t be used on the networks of the future. Also, because there is an open competition in IP technology, the phone companies’ competitors have an advantage because they’re not saddled with the expense of maintaining the PSTN.

In 2012, AT&T petitioned the FCC to allow the company to begin running tests in certain parts of the country to switch out the PSTN with IP technology. AT&T believes that the tests will help them and their customers to prepare for the inevitable – the demise of the PSTN.

So what does that mean to your business? Eventually, there will be no more PSTN. Companies will need to adapt. Alarm, phone, faxing and point of sale equipment will need to be able to operate on an IP network.

Next week: Part 2 of the Phone Company’s dilemma, how to prepare your business for the end of the PSTN.

If your business would like help preparing for the demise of the Public Switched Telephone Network, please complete the form on the right side of this page.