World War II and the Telephone 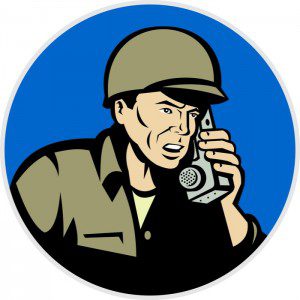 There were approximately 15 million phones in use in the United States in 1933.  By September 1st, 1939, when Germany invaded Poland, that number exceeded 20 million.

About the same time AT&T was producing more than 2 million new phones per year.  Around the same time, AT&T set a record by producing 50 billion conductor feet of lead covered cable in one year.

No Substitutes for Coffee

The War Production Board was restricting the use of resources in the production of non-war related products and services.  Residential phone customers were allocated party lines in lieu of standard private lines.   In the following AT&T video a phone company employee explained to a customer that the copper required to produce one and a half miles of copper wire could be used for ammunition that could keep a machine gun firing for 4 minutes.

Citizens were urged to curtail long distance calling, especially to war centers, like Washington, DC.  In the same video a caller asked to be connected to Portland, Maine.  When the operator informed him all circuits were busy and asked if he would like a call back when they were available, he declined and stated that he forgot that making such a call was considered a “war crime”.

Propaganda pamphlets reminded citizens of the importance of the telephone in the war effort.  One such pamphlet displayed an image of Uncle Sam and declared, “He’s Got to Have the First Call”.  Another: “Help Keep the Lines to Washington Clear.  War Comes First”.

This Memorial Day, you can be thankful that there’s no shortage of phone service or phone equipment.  Even with our troops stationed in the Middle East, people have more ways to connect to their love ones than ever before.  If you have a family member or loved one in the military, make use of those resources, to reach out to them on Memorial Day.